Does CBD Work For Back Pain? Everything About CBD And Back Pain 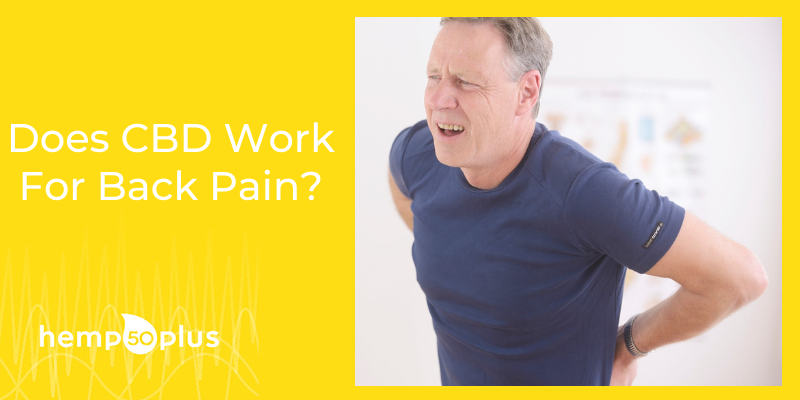 If you’ve ever had to deal with a case of severe back pain or inflammation, you know how debilitating this condition can make you feel. The effects can encompass the physical, psychological, and emotional parts of your life. If the condition becomes chronic (long-term), your quality of life can quickly erode. These most common conditions are called chronic back pain.

The number one recommended treatment for chronic back pain in the United States is prescription drugs, a majority of which are opioid-based. Opioids are derived from the poppy plant. This same plant is used to produce heroin. This trend has become very troubling for the millions of boomers who struggle to manage their chronic back pain every day.

Most realize that there has been an opioid epidemic in the United States for at least the last two decades. The bottom line here is that opioid-based prescription drugs are highly addictive and can cause immeasurable damage to the lives of those who are taking them.

In some extreme cases, certain physicians will abruptly take a chronic back pain patient off these opioid-based prescription drugs – not understanding the consequences that accompany these severe withdrawal symptoms. In some cases, these same patients are forced to turn to the street and purchase illegal drugs like heroin or fentanyl just to avoid becoming sick from withdrawals (which can last several days to a week). Given this set of sobering facts, wouldn’t it be more beneficial if there was a safe, all-natural, and more effective treatment available to those suffering from back pain? As you probably have already heard, CBD wellness products are taking the world by storm and offer a real alternative to prescription drugs that have been pushed by the conventional healthcare system for so long. Let’s now take a closer look at what CBD has to offer those who suffer from chronic back pain.

Does CBD Work For Back Pain?

CBD oil or Cannabidiol is sourced from the hemp plant and was made legal when the 2018 Farm Bill was signed into law. This wonderful natural compound has no known psychoactive effects, in other words, it won’t make you high. But CBD has been proven in clinical studies as well as through anecdotal evidence to help manage the symptoms of a myriad of conditions.

According to the Green Dragon Gold CBD website, a single care study revealed that the most common use of CBD was for the relief of pain (64%), 42% of baby boomers use CBD to relieve the symptoms of joint (shoulders, hips, knees, elbows) pain. Of those who used CBD, 22% reported that it helped them supplement or replace prescription or over-the-counter drugs. The movement away from pharmaceutical-based drugs and toward holistic alternatives is an emerging trend in our healthcare system today Additionally, according to Medical News Today, researchers across the board agree that CBD is highly effective in the treatment of pain and users cannot build up a tolerance to it. This means that chronic back pain patients will not have to continue taking more and more in order to enjoy the optimum benefits which is not the case with opioid pain medications.

How CBD Works For Different Types Of Back Pain

According to RhematoidArthritis.com, whether applied orally or topically the facts about CBD oil are that this natural compound has a very, positive effect on arthritis pain. It was also determined that CBD reduced joint inflammation and protects the nerves from damage. Let it be noted that when you reduce inflammation in the body, you also reduce pain levels.

In a February 2020 article on healthline.com, a published report highlighted that using CBD oil in the treatment of pain has been very promising. From yet another 2016 study conducted on rats, the application of CBD oil showed a dramatic reduction in inflammation in joints as well as overall pain caused by arthritis. Even more remarkable was the complete absence of any side effects.

Published on the wayofleaf.com website, spinal stenosis (aka spinal injury) creates inflammation which causes pain. CBD oil is effective in this regard because the compound interacts with the endocannabinoid system (ECS) which is a network of receptors that play a large role in brain function and nervous system regulation.

CBD interacts mainly with receptors at CB1 and CB2 and is known to disrupt the chemical messages that cause pain and inflammation. CBD also binds to TRPV1 cells which regulate temperature and inflammation in many parts of the body.

According to Spinenation.com, CBD oil is also having excellent effects on the treatment of spinal injuries. This is yet another huge area where CBD is having a big impact on the lives of chronic back pain patients. This is exciting news!

Different Forms Of CBD Oil For Back Pain

Pure CBD Oil: This oil is taken directly from hemp plant and carries with it the most potent dose available. CBD can be ingested via a vape pen – though we do not recommend this method.. Additionally, Liquids or tinctures which contain pure CBD oil are the most popular among active aging boomers.

These products can be either sprayed into the mouth or under the tongue. It is recommended that CBD tinctures be held under the tongue for 30 – 60 seconds then swallowed.

CBD capsules are pretty self-explanatory. You just take them with a glass of water like a vitamin. CBD capsules are a great option since boomers already purchase nutritional supplements. CBD can be a great addition to your supplement routine.

CBD topicals have earned a reputation for being the best product option for managing chronic pain. Topicals offer the highest absorption rate because these products do not pass through the digestive system. CBD topicals are applied directly to the skin of the affected area resulting in a much higher absorption rate.

In a 2017 review of the safety and side effects of CBD oil in the treatment of pain, the compound has been found to have virtually no side effects and deemed very safe for use. The review went on to note that many participants in these studies responded to varying levels of CBD dosages starting from 50 milligrams going up to 1,500 milligrams per day.

How Much CBD Should You Take For Back Pain? How do you decide on a CBD dosing amount for yourself? The researched-based information in this article should give you all the confidence you need. Remember that the research has shown that CBD is well-tolerated and has very few adverse side effects. However, we want to “err on the side of caution” if you are considering trying CBD for the first time.

In most cases, starting with a very, low dose is the best way to introduce yourself to CBD. Pay close attention to how CBD makes you feel and begin to increase the dose if you are still experiencing pain and inflammation. Remember that most chronic back pain patients normally require higher daily doses to enjoy CBD’s optimum benefits.

However, there are other factors affecting the proper dosing amount:

For the management of back pain symptoms, it’s recommended to begin with 40 mg of CBD per day. You may increase this by 10 mg each week until you find the pain becoming more manageable. Many research study participants reported noticing a reduction in their back pain when taking 50-60 mg of CBD per day.

If you are currently taking a CBD tincture, gummy or gel cap, refer to your product’s label for dosing guidelines. Most 1 oz CBD tinctures contain thirty servings. CBD can be taken once or twice daily. These decisions are up to you.

Potential Risks And Side Effects

In a medical review published in 2011 researchers discovered even at higher dosages of 1,500 mg a day, there were no noticeable side effects and participants tolerated CBD very well. Another review was conducted in 2017, which backed up these same claims – solidifying the safety of CBD oil for daily use.

Another factor to be considered is the very favorable side effect profile of CBD. Compared to opioid-based prescriptions, CBD is clearly the safer alternative. These new facts cannot be overstated.

This new trend in health and wellness is here to stay and will pave the way for many baby boomers to begin managing their chronic pain conditions. When you begin to control and reduce your pain, you can take back your life.

When you feel better – you can begin to re-engage with your life. Taking those much-needed walks in the park along with spending quality time with family and friends. CBD can help to get you there – at least that’s what the research is telling us. In the end, these decisions are all up to you. Choose wisely.

You have nothing to lose and a life of pain-free living to gain.

We help active aging boomers to maintain their independence by educating them on the incredible health benefits of CBD. Our goal is to become the educational authority in the CBD/boomer space.

Our guide to managing stress

Our guide to managing pain